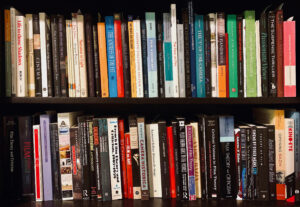 Housed in the Department of English and Comparative Literature, Film Studies is currently in the process of expanding at the graduate level. We are developing a graduate certificate in Film Studies, which will be open to MA and PhD students.

If you are interested in applying, you will find the practical information you need on the Department of English and Comparative Literature site under the graduate tab. See here for details regarding admission.

We already have a number of students enrolled in the department’s PhD program who specialize in cinema studies or who study film and media in relation to literature. For profiles of these students, go here.

Our graduate students also have the opportunity to be Teaching Assistants in undergraduate courses (ENGL 142 Film Analysis, CMPL 143 History of Global Cinema, and CMPL 144 Engaging Film and Media).

Our PhD students present their research in a graduate extension of the Triangle Film Salon, an annual series of lectures and colloquia. The Salon brings in internationally renowned speakers in film and media studies and gives our students the opportunity to interact with them.

Students may also undertake directed readings with our faculty, supplementing their coursework with intensive studies of a topic they choose.

Dr. Gregory Flaxman, author of Gilles Deleuze and the Fabulation of Philosophy

Dr. Rick Warner, author of Godard and the Essay Film: A Form That Thinks

We are currently working to broaden graduate opportunities in the Research Triangle by partnering with our neighboring institutions, Duke University and NC State University.

CMPL 535 The Cinemas of the Middle East and North Africa

CMPL 5xx Cinema, Painting, and the Frame (to be proposed fall 21)

CMPL 494 The Essay Film: Adventures in Modern Cinema since 1945

CMPL 479 What is a Medium? German Media Theory from Aesthetics to Cultural Techniques

CMPL 452 The Middle Ages in Film

Check back soon for further information.

If you are interested in studying film at the graduate level at UNC-Chapel Hill, contact Dr. Rick Warner, Director of Film Studies, crwarner@email.unc.edu.